When we set up Beer Nouveau last year as England’s smallest commercial brewery, we had some pretty high hopes for it. These weren’t for it to become the UK’s most sought-after brewery, they weren’t for it to become the UK’s biggest brewery, or even for it to become just large enough and just famous enough for a multi-national to come along with a multi-million pound cheque and buy us out. Our high hopes were that people would like our beers as much as we did. It’s a great feeling as a brewer when you see someone buy one of your beers, and better when you see them enjoy it. What tops this though is the feeling you get when you see a drinker come back for a second one, especially in this market where the choice of beers is so great that we’re truly spoiled.

We’ve made no secret that for the last few months we’ve been running at capacity – a whopping 42 litres (one cask) at a time – and that we’ve had a waiting list a couple of months long. This may sound like a good problem to have, and in a way it is, but we can’t help but feel we’re letting people down each time we say we’ve no beer available.

What we have kept quiet (except for all the many, many people we’ve chatted with) about though is our expansion plans. We can no longer operate as England’s smallest brewery; we’ve expanded our self-built pico-brewery as much as possible. Over the nine months we’ve been brewing we’ve built a second brew-kit, allowing us to do two brews side by side, and we’ve bought as many fermenters as we could fit into our converted garage, but the time has now come to give the garage back to the assorted junk that’s been evicted to the attic and buy a bigger brewery.

This is a massive step for us and one we want to get right, so we sat down over a couple of drinks and discussed what we thought would be right, not just for us ourselves, but for Beer Nouveau. Beer Nouveau is about two things: brewing modern versions of traditional beers, and pushing the boundaries with what is seen as craft beer.

The coincidence seems too good to be true that the perfect kit in the perfect location has become available at the time we need it. Almost as soon as we started looking for equipment and premises we heard the sad news that Privateer Beers were selling up. If you’ve never had any of Matt’s beers, then you’ve really missed out. Matt is a brilliant engineer and built a wonderful brewery in an arch on Temperance Street. Privateer Beers were the first brewery on the new Piccadilly Beer Mile, and proved that traditional ales don’t have to be boring, brown, twiggy tasting affairs. However, Matt got a once in a lifetime opportunity to follow his engineering passion and rebuild steam locomotives, so the Temperance Street Brewery was put up for sale.

It’s taken a couple of months, but now we can finally properly announce what we’ve been really bad at keeping a secret: Beer Nouveau is moving into the Temperance Street Brewery.

It’s a big step up from ¼ brewer’s barrel to 6 brewer’s barrels, but this will mean that our beers will not just be available to everyone we’ve been unable to supply in the past, but also to new outlets further afield. It also means that we can finally start producing the beers we believe will suit keg-conditioning, as well as looking into can-conditioned beers. Getting to this point has been a lot of hard work, going forward is likely to be harder still. But we think it’ll be worth it, and we hope you’ll find it so too! 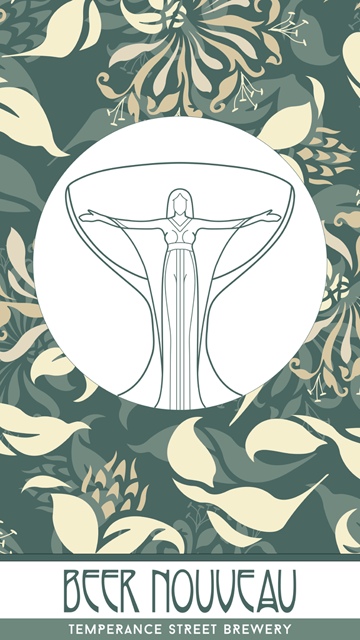