Most of our Manchester-themed specials (some of which become regular brews) are inspired by individuals, Lowry, Burgess, Marx, Engels, Pankhurst and Alcock to name a few. People who were either from Manchester, or had strong connections with this great city. But our new beer was inspired by many people.

Recently Historic England have been running a project tracking the country’s LGBTQ heritage, and one site that caught our eye was Temperance Hall in Hulme. In 1880 it became infamous as the site of a cross-dressing ball where attendees gave the password “sister” to the “nun” watching the door. 47 people were arrested, dressed “in most fantastic fashion”, including 22 “in ladies’ wear”. All of those arrested were charged the following day with “having solicited and incited each other to commit an unnameable offence.”

How Manchester has changed since then, but not until recently. It took until the 1990s for the Gay Village to properly start up, with the 1980s seen as a dark decade of persecution by the then Chief Constable. But Manchester has changed and is now one of the most open and welcoming cities in the world, with one of the most heartwarming sights on a Friday lunchtime to see young same-sex couples getting off the train at Piccadilly Station for a weekend away together, tentatively holding hands in public, still unsure of the reaction they’ll get. The reaction they get is warm, welcoming and encouraging.

So our new beer Sister to Nun salutes not just one person, but all those who’ve struggled or been persecuted over the years to make Manchester the welcoming place it is, regardless of who you want to hold hands with. It’s a light, refreshing 4.9% pale ale with predominant floral hops, perfect for a Mancunian summer. 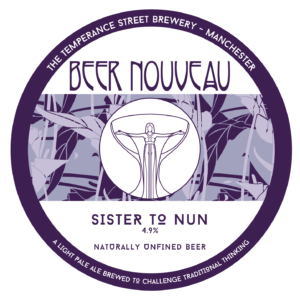 1 thought on “Sister to Nun”