This has been a strange year for our industry, and looking back on it I do wonder how next year is going to be. 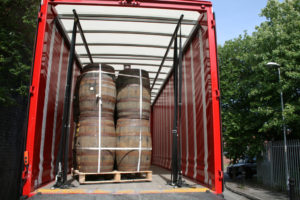 For ourselves we’ve seen a focus more on heritage brewing. We launched our Crowdfunder this year to raise money for our Heritage Barrel Ageing Programme, something we’d thought about doing once Beer Nouveau was more mature, but which seemed to fit now. We were totally blown away by how popular it was, by the amount of interest people had in recreating heritage beers, brewed and matured how they would have been in the past. We were even more surprised that this led to an opportunity to work with both Malting Box and Crisp Maltings to collaborate on recreating the malt, a heritage grain malted and kilned to the same specifications as it would have been in the 1800s. We still don’t know for sure how these beers will turn out, but with the recreations we’ve already done, along with that by Little Earth Project and Cheshire Brew House, we’re getting a good idea; and we’re very excited! 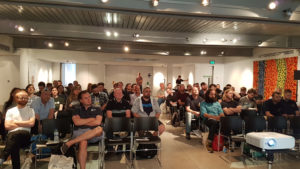 We gave our first talk on heritage brewing this year: at the Edinburgh Brewers Journal Lectures a room full of rapt attendees listened to my ramblings about recreating heritage beers, and how mostly everything we know about beer’s history is romantic fiction. 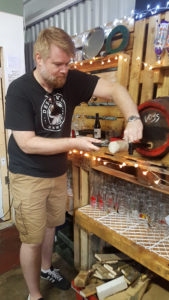 This year also saw us have the opportunity to work with the traditional Norwegian farmhouse yeast Kveik. This is starting to appear from a few more breweries now, but we were lucky enough to get some fresh from Norway along with some juniper sprigs and brewing instructions from @GodesetBrygg on Twitter earlier in the year before it became widely available on the market. Needless to say this heritage beer, brewed to a traditional recipe with the original yeast and then conditioned and served direct from a wooden cask, was something no one in England had had before, and it was superb. We can’t thank the folks involved enough for the opportunity to have taken part in this.

It’s not just been heritage brewing we’ve been doing this year, even though that seems to be what we’re getting a reputation for, but the more weird and wonderful brews that we’ve created and sold through the brewery tap have certainly caught people’s eyes. The Melissa Cole inspired ‘Weird Is My Happy Place’ weekend we put on in October saw us sell a 16th century Cock Ale and a 20th century Meat Stout alongside a Pizza flavoured beer and a Champignon and Chardonnay pale, alongside IPAs brewed with experimental hops. 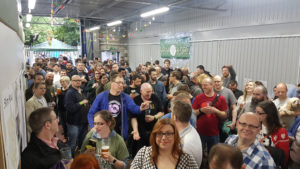 Our brewery tap also rather unfortunately hosted a Hops Not Hate event. We were more than happy to do this – indeed, we were the idea and driving force behind it – but the situation was a desperately sad one. Following the Manchester Arena bombing a lot of people in our industry were left numb, and we didn’t know what to do. So we did what we do best, we had a party. Breweries large and small, near and far donated beer and time to the evening, the local Camra branches lent equipment and time, bottle shops donated bottles, bloggers donated tasting evenings, our neighbours lent us their car parking spaces in the street, crowd control barriers, and even a marquee so we could accommodate everyone. We drank, we laughed, we had a raffle, and we raised over £7,400 that was donated to the emergency fund.

On a happier note, our tap also played host to a series of pop-up brew-taps: we lent our spare bar to other breweries to come along for a weekend and sell their beers direct. These went down really well and we’ll be doing them again in 2018, including the first one we’ve already organised: Abbeydale! 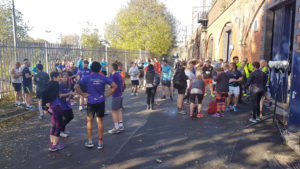 The Mikkeller Running Club we host on the first Saturday of each month is growing too, and this year, along with the Liverpool chapter, hosted the UK’s first Beer 10km, a 10km chip timed race starting and ending in a brewery! This was so much fun we will be doing it again next year.

2017 saw Brewery Taps definitely starting to make their mark on the Manchester drinking scene, with Runaway, Cloudwater, Track, Alphabet, Unit 101, Fairfield Social Club and ourselves now open every weekend. The number of visitors we’ve welcomed to our tap has grown and grown and we’ve gained a group of regulars too, people who keep coming back each weekend, who treat our tap as their local pub. The number of people on the walking tours organised by UK Brewery Tours has also increased to meet capacity, and to become twice monthly now instead of once a month. Beer tourism is definitely taking off, and Manchester is well placed to be at the heart of it. Each weekend we chat over the bar with individuals, couples and groups from all over the globe; 2017 even saw us give our first interpreted tour to a group of Russians visiting from Moscow!

In the wider industry there have been four main things that’ve stood out. The first is the inevitable round of buy outs, buy ups and buy ins. Big Beer will always be there looking over the shoulder of smaller breweries, and will always do what it can to make as much profit as it can. We should never forget that brewing is a business, and when money is involved, people want it.

The cost of everything has gone up, malt, hops, yeast, water, electricity, rent, rates, diesel, everything. A lot of this is due to the Brexit effect, a fair bit due to market demands. I don’t know how much more the market can stand, and with more and more breweries fighting over a smaller amount of available tap space, I’m also not sure how friendly the industry will remain. Route to market is the single hardest part of running a brewery, and any brewery setting up now that isn’t looking at having its own tap should in my opinion reconsider its business plan.

A word used at our tap recently was Toddlerfication, during a conversation about the Portman Group’s ruling on Tiny Rebel. We’ve got pastry beers, milkshake beers and IPAs that taste of fruit juice, all packaged in labels covered in bright colours and cartoons. Regardless of who they’re aimed at, they appeal to children. But then, so do so many things. Laundry capsules have to come in childproof containers (that only children can open), with big warnings saying “KEEP OUT OF THE REACH OF CHILDREN”. The way our industry is self-regulated doesn’t work very well, but it’s better than if the government and their funders the UK Temperance Alliance (now called the Institute of Alcohol Studies, formerly the Temperance Movement) were to regulate us. Perhaps we should, as a young and growing part of the overall drinks industry, look at what we’re doing, and not put ourselves in the sights of the easily outraged, because they have a lot more political clout than we do.

The larger thing we need to address as an industry also came up again this year, but unlike in previous years it looks as though something might finally start being done about it. Sexism has always been an issue in the hospitality industry, and enough people are finally shouting about it. This is not something for me as a man to lead the charge on, but this is something for me as a human being to back as much as I possibly can. There are some great brewers out there who happen to be women, and this year I had the privilege to brew with two of them. Melissa Cole is primarily a beer writer, but she also really knows her stuff when it comes to recipe creation and brewing, and along with Neptune Brewery we created Salacia, one of our best beers today. And earlier in the year, during Manchester Beer Week we held an open brew day collaboration with Origami Brewing, where Erin and Pam worked their wonders and we produced BrewDay IPA, something outside of my comfort zone (modern American hops) that went down incredibly well with drinkers. There is a momentum around the world, and hopefully 2018 will be the year it gains traction.

We’re going to try and be more vocal and informative on social media. Yes, it is possible. A lot of our beers have a story behind them, often about the person they’re named after, and we’re going to try and get those stories up on our website (which is also getting a facelift). 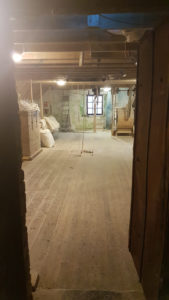 We’re also going to be doing even more heritage brewing. We’ve not only been learning a lot from our research, but we’ve been having great fun and have loved sharing that knowledge with everyone. So there’s definitely going to be more of this. We’ll be starting the year off with brewing the Heritage Barrel Ageing Programme beers, along with some Viking Ales with specialist malt we’ve collected from Orkney! More details of that experiment to come, so keep your eyes peeled, it’ll be worth it! We’re also looking to do some heritage collaborations with other breweries, working with them to recreate beers from their archived brewing ledgers that might be a bit too much of a risk for the size of their kits.

Don’t worry though, we’ll also be doing a lot more of our imaginative brews. The pizza beer was so well received that we’ll be looking to create varieties which mimic different toppings, and who knows what else might take our fancy!

And we’ll also be working to improve our brewery tap. We’ve got some great neighbours who we’re working with to stock their drinks on a permanent basis, so look out for very locally made gin, rum and soft drinks behind our bar. We’re also planning to increase the range of mead we sell. The Lancashire Mead folks have helped people realise how great mead can be, and whilst there’s a lot out there, it’s rarely seen. So we plan to do something about that. We’re also looking to start up a regular whisky afternoon, and are working with some lovely and knowledgeable people on this. As with everything we do, we’ll be trying to keep it as great value as we possibly can.

Finally, we like to think that we’ve always been an interactive brewery, chatting with customers and acting upon their ideas. So if there’s something you’d like to see us do, please let us know!

Have a great New Year, and let’s toast to a great next year!
Cheers
Steve & Lesley